Back in the day, believe it or not, sunglasses weren’t made to protect peoples’ eyes from the sun’s harmful UV rays. Rather, they were first used by Chinese judges to conceal their eye expression. 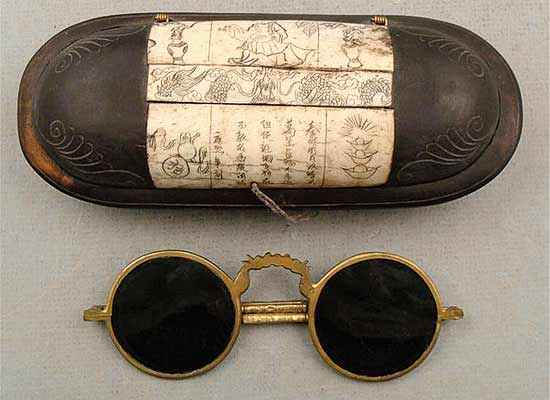 Time for a history lesson. In the 1300’s, these judges wore smoke-coloured quartz lenses to conceal their conclusions as they considered pleas as credible or mendacious. They would wear these glasses until the trial’s conclusion, as to keep their decision hidden, or you know, maybe one of the judges was cross-eyed and self-conscious.

Then came a time in the 1400’s when Italy felt sorry for China and introduced them to the notion of vision-correcting lenses. They were also darkened and used in courts and oh man, any judge who was really self-conscious can now at least see!

Now let’s skip to the twentieth century. The past couple hundred years in the history of sunglasses isn’t very interesting, but if there was anything worthy to note, it’d be that a man named James Ayscough made the addition of green and blue tints to correct color based vision impairments in sunglasses.

Okay. Let’s get back on track. Where was I? Oh yes, in 1929, Mr. Sam Foster, founder of the Foster Grant Company – sounds like a modest dude – sold the first pair commercial pair of sunglasses in Atlantic City, USA. A year later, sunglasses became the new hottest fashion item.

At the same time, the military was at the forefront of sunglasses innovation and technology because of the impending second world war just around the corner. The American Army Air Corps commissioned Bausch & Lomb, an optical firm, to create a new lens that would protect fighter pilots from high-altitude glare and have it ready for mass production.

So what did Bausch & Lomb do? They created a new style of sunglasses under the brand name Ray Ban and err, I’m drawing a blank, what was the name of those glasses again? The one Ray Ban basically built its entire brand on? Oh yeah, they called them Aviators. These Aviator style glasses used a new polarized lens technology and lenses with a large surface area that allowed pilots to look down at their controls and ahead at the same time.

From there, all it took was an ad campaign from the one and only Foster Grant Company to add gas to the fire and accelerate the growing craze in sunglasses. The campaign used celebrity endorsement and well-known designers to add a seductiveness to sunglasses, which is very much the same today.

Decades on and the aviator is still one of most popular in the history of sunglasses, in fact I wrote about them here – a timeless design.

So there you have it. How sunglasses came to be. Now, if you don’t mind, I’m going to go put on my Aviators and pretend to be a pilot.

Witching weekend is looming. Your neighbours have their broomsticks at the ready. And the kids of the neighbourhood are rotting their teeth with spooky…