Well, I think it’s safe to say that Summer has officially gone. As we head towards Halloween, and start to see the Christmas present adverts begin to appear on television, we put away our summer clothes, reach for the scarves, coats and jumpers, and mentally begin to prepare for the colder weather. This means we can begin ordering the pumpkin spiced drinks at the coffee shop, can turn the heating on or light the fire, and get a blanket out on an evening to keep our toes warm.

So what’s better at this time of year than discovering a reading list that will shock you, make you cry, make you laugh, break your heart and then repair it again, or have you thinking about whodunnit? Well that’s what I’m here for today.

Autumn is my favourite season and it’s also probably the one season where I read more than any other time of year. There really is nothing better than being snuggled on the sofa with a hot coffee on a freezing Sunday morning, getting stuck into someone else’s story.

Bearing that in mind then, I have selected five books which I think would be great reads for this season. I’ve tried to select a mix of deep and light, historical and contemporary, to hopefully appeal to a wide range of you lovely readers . . . let’s see what we have:

The seventh book in the Shardlake series from Sansom, Tombland is set in Tudor London during the brief reign of the sickly child king Edward VI. It is two years after the death of Henry VIII and the country is in crisis. Matthew Shardlake a london lawyer is called to Norfolk on a legal case for the Lady Elizabeth, daughter of the infamous Anne Boleyn, and in doing so places himself at the heart of a rebellion masterminded by Robert Kett. Shardlake must solve his case, whilst also grappling with his own loyalties and those of his closest friends.

What I’ve always loved about the Shardlake series is the total immersiveness of the setting – you truly feel like you have been enveloped in life in Tudor London. If you are interested in historical fiction at all, then this is definitely the book for you! Don’t worry if you haven’t read any of the previous books in the collection. Whilst Shardlake’s story and those of the characters closest to him in the books run linear through the entire collection, each book can be read as a standalone. I first read the fifth book in the series, Heartstone, and loved it so much that I then bought the other four.

This is How it Always is by Laurie Frankel

Selected as Reese Witherspoon’s current recommendation, ‘This is How it Always is’ is a book that is so of its time that I think it should be socially prescribed. The story follows the Walsh-Adams family which consists of Mum Rosie, Father Penn and five rambunctious sons. When youngest son Claude says he “wants to be a girl” the family begin to adjust to Claude as Poppy. The book follows the family’s adjustment, particularly looking at the impact on Rosie and Penn’s four sons, as well as the world around the family – questioning human acceptance and prejudice, as well as asking the reader why ‘this is how it always is’ . . .

Reese Witherspoon said about the book, “every once in a while I read a book that opens my eyes in a way that I never expected […] It’s a book about family: childhood, parethood and the sometimes heartbreaking decisions that come with it.” If you are looking for a book that will teach you something in a way you never expected, then this is the book for you . . . but be prepared to have a box of tissues nearby – it might just catch you out emotionally!

The Tattooist of Auschwitz by Heather Morris

Not every book you read should be lighthearted and make you feel good, and when you see the title of this book, you would hardly expect this to be one to lift your heart, but despite it’s difficult and heartbreaking narrative, The Tattooist of Auschwitz does show how hope, compassion and human determination can survive, even in the most brutal of environments. The book is a true story of the experiences of Lale, a Slovakian Jew sent to Auschwitz, and Gita, his wife. They met when Lale, who had been given the job of tattooing numbers on to the inmates of the concentration camp upon their arrival, locked eyes with Gita whilst he marked her with the indellible ink. Despite the horror of their surroundings they fell in love and dreamed of a future together, whilst Lale used his position to help many inmates under the nose of the SS guards, smuggling jewellery from dead prisoners and exchanging them for food.

Whilst ‘The Tattooist of Auschwitz’ was actually published in January of this year, it has only really become very popular in the last few months as it attracted the notice of the Richard and Judy Book Club which has propelled a number of books to UK success. They reviewed the book on their website, saying “The Tattooist of Auschwitz is not an easy read, but it is an immensely enriching and rewarding one. Heather Morris has done a marvellous job of painting the opposing sides of the human condition – the capacity for total evil, and the capacity for unconditional love.”

Probably one of the most challenging books on this list, ‘Milkman’ has just been announced as 2018’s winner of the Man Booker Prize for Fiction, the first Northern Irish writer to ever win the prestigious title. Man Booker winning novels are often a challenge to read, but are always, always worth the effort and I am sure this one will be no different. ‘Milkman’ tells the story of an unnamed young woman, known only as “middle sister”, who is being sexually pursued by a man known as the milkman. The story weaves between the characters and the setting of sectarianism ridden Northern Ireland in a specific and yet universal way, asking questions about conflict, opportunism, sexual exploitation and the strength of human spirit.

Even the judges who apparently unanimously chose Burns’ book admitted that it may be a challenging read to some, but likened it to climbing Snowden, difficult to achieve, but well worth it for the view from the top. So if you’re looking for something to challenge you, that is both historical as well as contemporary, then this is certainly the book for you. Just don’t be prepared to read it in a single sitting . . . or even two or three!

And because it simply wouldn’t be Autumn without a ghost story, I’ve included ‘Melmoth’, a modern gothic novel which blends the supernatural with reality. The narrative follows Helen Franklin who did something twenty years ago that she cannot forgive herself for. Then she finds a manuscript which details witness accounts of a Melmoth – a tall female being which hunts down the guilty and forces them to relive their sins. “Everyone that Melmoth seeks out must make a choice: to live with what they’ve done, or be led into the darkness. Helen can’t stop reading, or shake the feeling that someone is watching her. As her past finally catches up with her, she too must choose which path to take.”

If you’re looking for a spooky read this season, then Melmoth is the perfect book for you – although maybe don’t read it at night, in the dark!

If you’re going to be reading lots of books this Autumn, then it’s important that you have a good pair of glasses that will protect your eyesight as well as giving you a chic new look. I am always on the lookout for a new style at this time of year, and whilst I usually wear a dark, square or rectangular frame year-round, I have decided to take the plunge this season and try something different. 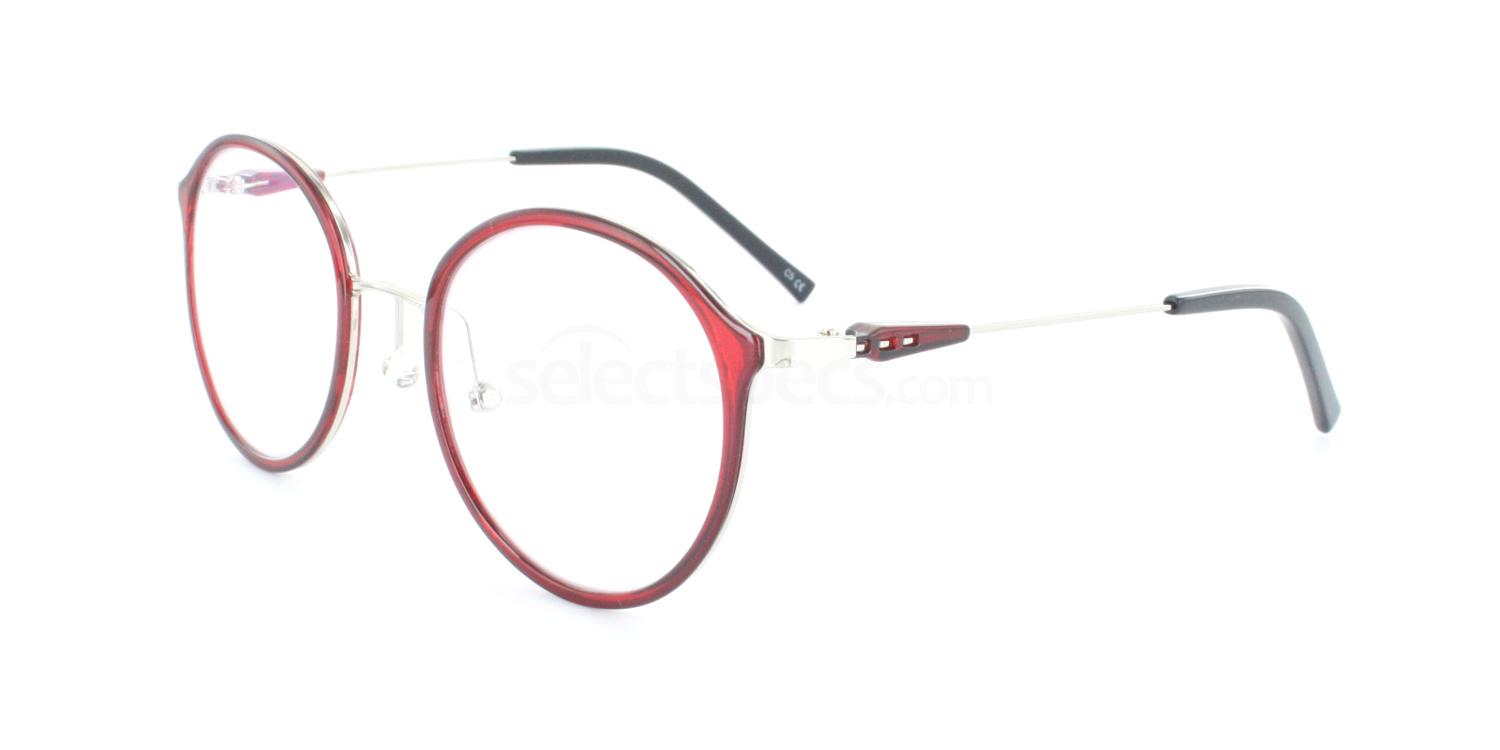 I like these Infinity 2025 glasses as they feel very on trend at the moment, but they are also quite different to what I would usually go for. They feature a thin, red, circular frame which is oversized, and the side arms and bridge are metallic which allows for the focus to be on the frame itself. At just £15.00 with free single vision lenses, they’re a great bargain also . . . which means more money for books!!

Have you read any of the books above? If so, what did you think? If you have any other recommendations for great Autumnal reads, let us know on our social media accounts. Got time to read another great article? Why not find out about newest Royal Bridge, Princess Eugenie’s eyewear style.

Don’t forget to tag your pictures with #SelectSpecsSelfie for a chance to be featured!

Christmas is just around the corner. Whether you’re looking to treat yourself to something new or you’re shopping for a loved one, there are…