So, Donald Trump is at it again. There’s no stopping The Trump Express as it rides the gravy train of success all the way to the White House. His landslide victory in the Nevada Republican caucuses has reinforced his position as the candidate to beat. And who knows what the results of Super Tuesday might lead to.

But of late, multi-million mogul Trump has been badgering Jeb Bush for ditching his glasses. Talk is cheap but the cost is nothing for the Don. Playground tactics are part of the makeup of what Trump is about and he is using them to great effect.

On the end of the latest barrage was George Bush Senior’s son Jeb who Trump made a real spectacle of! The blonde bombshell taunted his former presidential rival after he replaced his eyewear for contact lenses.

Focusing on this a little more, the Don swiftly took to Twitter to proclaim; “Jeb Bush just got contact lenses and got rid of the glasses. He wants to look cool, but it’s far too late,”

Jeb Bush just got contact lenses and got rid of the glasses. He wants to look cool, but it’s far too late. 1% in Nevada!

And so it proved as Jeb Bush dropped out of the Republican race. Trump has been notorious for making fun of his rivals glasses when out and about. Columnist George Will got it in the neck as Trump believed he was only intelligent due to his glasses.

On top of this, last year, he declared that former Texas Governor Rick Perry looked just as bad in specs. “He put glasses on so people will think he’s smart. And it just doesn’t work! People can see through the glasses,”

It looks like a case of the pot calling the kettle black in this instance as both Donald and his daughter Ivanka share something else. Both Trumps actually lay claim to an extensive collection of signature eyewear. From sunglasses to super smart business like specs, talk about keeping it in the family.

It goes without saying that the presidential race is a long and arduous one. Keep your eyes peeled as there is sure to be more jibes along the Republican road. But for Trump’s arch nemesis, Hillary Clinton, she has shown some specs appeal of her own.

The best part of being at Caesar’s Palace at midnight? Meeting the amazing staff. A photo posted by Hillary Clinton (@hillaryclinton) on Feb 18, 2016 at 1:26pm PST

In Las Vegas, she revealed only last week some snazzy specs guaranteed to dazzle any prospective voter. This was the first time we have seen Clinton in glasses but it definitely won’t be the last. If you want to enjoy that presidential glow, take a look at our luxurious Chopard VCH160S or eye popping Bvglari BV4102B.

Having jetted in from Chicago, it is believed that Hillary Clinton ditched her contacts in favour of glasses. With numerous pics already doing the rounds, this appears to be a rare opportunity to view Clinton in glasses.

Her stop and chats were captured for all and sundry to see after greeting hotel staff at the iconic Caesars Palace. She may have swapped them during her flight but Clinton has been papped frequently in her role as Secretary of State.

During her tenure, Hillary sported Fresnel prism lenses which offered help for double vision. This was her preferred choice in 2013 as a result of a concussion which led to a brain injury.

In 2014, Dr. Marc Werner, an ophthalmologist from New York explained how these specific glasses functioned with those who had suffered brain trauma.

“In order to see one object, your eyes need to be pointed in the same direction. If your eyes are misaligned, one way to optically align them is to put a prism … on your glasses. Any issue which raises intracranial pressure can damage one of the nerves which moves the eye around, and if it damages one of the nerves, your eyes will be misaligned — maybe temporarily, maybe more permanently,” Werner noted.

For now, she certainly needs to focus on her popularity at present. In the last few weeks, this has been waning thanks to debonair Don. And Clinton’s short sightedness did not help matters either. The late night meeting with hotel workers was not enough as Trump captured Nevada’s voters with consummate ease.

Nevertheless, there is still a long way to go before a winner is announced (minus the X Factor drama.) But for glasses wearer Clinton, her specs power may take her all the way to Capitol Hill and beyond. In addition to this, Clinton has been seen in images from her studying days. Here, she is captured wearing some rather fetching specs in her days on campus at Wellesley College. 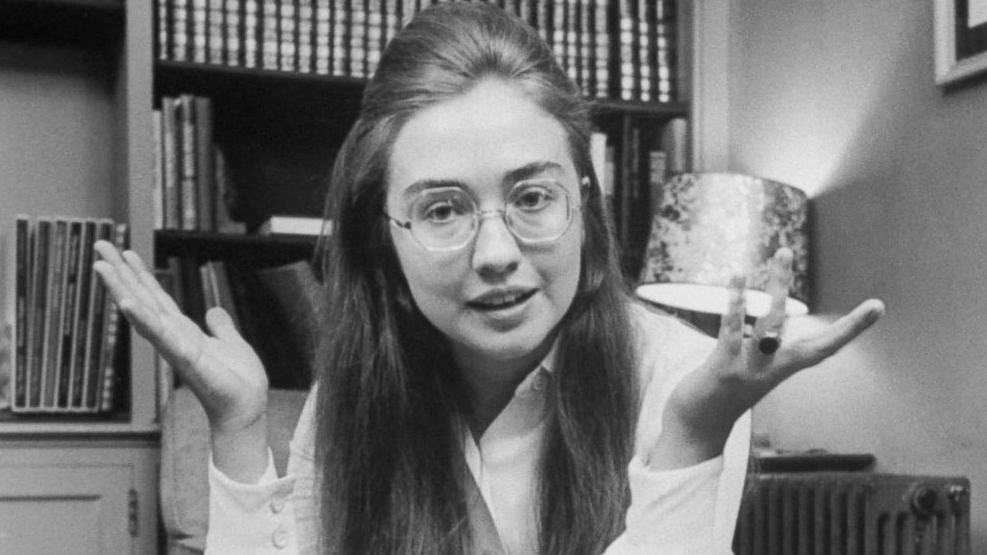 She was often seen in a pair of rather interesting glasses which is in stark contrast to her current usage of contacts. A young Hillary Clinton can be seen wearing a pair of hexagonal like frames. At first glance, they are almost mesmeric and without doubt much more interesting on the eye.

As retro as playing Super Mario Bros whilst watching Back To The Future, you can achieve this look with our classic Pierre Cardin 8379. Available in either champagne or a pale turquoise frame, you can step back in time with a pair of these. Plus, they include free Single Vision Lenses & Coatings as well as free delivery. What’s not to like?

Clinton, not to mention Bernie Sanders, are among the chosen few to try and stop the juggernaut that is Donald Trump. The caucuses will play an integral role in deciding who will be the number one candidate.

It has been announced that if some candidates have equal votes, coin tosses would be done to decide the winner. Naturally, Nevada was the only exception where a pack of cards would have been used. What’s next an all out dual at dawn?

Obviously, there was no need for that, but for Clinton, her emphasis has switched to unionised workers in the long term. When it comes to Bill Clinton, he has been spotted wearing some sophisticated eye candy in the past. He appears to opt for the super slim spec look featuring steel frames such as the Persol PO2401V.

With the support of her daughter and hubby Bill along the way, will Hillary have what it takes to capture first place past the presidential post?

The 2017 Invictus Games in Toronto are now over, but we loved watching all the action! These games have been running since 2014, a…