He put the boom-boom into our hearts and took us to the edge of heaven with his infectious music, superstar style and iconic looks for nearly four decades. Yes, George Michael will inevitably be remembered by many people for many reasons – forever outspoken and always unapologetic, he was a trailblazer in both his personal and professional life, making a stamp on pop culture that endures to this day.

Join us as we pay tribute to this style icon.

When Wham! exploded onto the music scene in 1982 with their new brand of carefree pop, George Michael and Andrew Ridgeley instantly captured the hearts of the public.

Still teenagers themselves, they connected to their young fan base with gutsy lyrics and catchy hooks, promoting a hedonistic way of life without work or commitments (but looking fantastic all the while).

Their fresh style on stage, including espadrilles, open suede jackets and rolled up jeans, would soon be replicated by dedicated fans and beyond, culminating in the iconic ‘Choose Life’ slogan tee worn by George Michael in the Wake Me Up (Before You Go Go) video.

This was the era of tropical-print shirts, white short shorts and finger-less gloves – bright, bold and perfectly put together, Michael had cemented himself as a style tour de force.

The Man, The Star, The Legend 🌟🌟🌟😥#feelingsad #georgemichael #thelegend #ripgeorge

A post shared by Alterations Boutique Ltd (@alterationsboutique) on Dec 27, 2016 at 6:30am PST

Hot off the heels of a huge world tour (including a ground-breaking 10 day visit to China), George Michael and Andrew Ridgeley were at the height of fame when George Michael was shot here performing at the 1985 Live Aid concert.

The performance marked a shift from the squeaky clean image of Wham! with Michael taking to the stage sporting a beard, black leather jacket, white tee and light wash jeans.

Completing the look with his signature gold hoop earring and slick pair of wayfarers, George Michael was paving the way to his burgeoning solo career and status as a style icon.

After parting ways with Andrew Ridgeley and leaving the Wham! days behind him, it was time for George Michael to embark on his much anticipated solo venture.

It was an instantly sexier, more mature Michael than his audience were used to, and with the release of the incredible Faith, he was catapulted further into the pop music stratosphere.

Leather biker jacket, low scoop white tee, single earring and killer pair of aviators are all synonymous with this era of bold music and enviable styling.

After affirming his capabilities as a bona fide solo star, it made sense for George Michael to take a moment of reflection and look back on his last twenty five years in the industry.

Losing his wavy locks and opting for a cropped style on top, the above album art for his acclaimed compilation of songs marks a maturer, more relaxed Michael.

His rounded, wrap-around shades hints at his uncanny knack for picking the perfect accessory, making a statement and complimenting any look.

May you rest in God's love and Peace! #2016 is just brutal. #GM #GeorgeMichael #George #Michael

From the slick aviators of the Faith era to the more playful, statement frames later in his career, George Michael was always an aficionado of a sharp pair of shades. We love the hybrid style he’s sporting here – half wayfarer, half cat-eye, they’re as unique and stylish as the man wearing them.

Pay homage to the much adored star with a classic pair of Ray-Ban Wayfarers, perfect for those fun and sunshine-drenched Club Tropicana days. 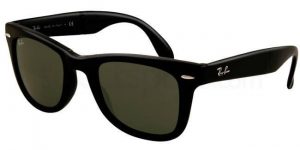 Feeling nostalgic for the 80s? Throw it back with our guide to SS17 Oversized Lenses

Nowadays, advert commercials can be considered a form of pop art. Extremely high budgets are invested in trying to make the most attention grabbing /…