Miles Davis is known to connoisseurs of Jazz music around the world as one of the most respected and influential musicians during the last century. He incorporated a myriad of styles to the Jazz genre which enabled him to have a career spanning almost half a century.

The trumpeter, pianist, and composer was born Miles Dewey Davis the Third in 1926 in Illinois, U.S.A.

His family was a lot more well off than most at the time with his father employed as a Dental Surgeon and his mother a Music Teacher.

Both their earnings allowed their family (which included  Miles’s older sister and younger brother) to live on a 200 acre estate with extra earnings coming from their pig farm.

Miles and his two siblings had to opportunity to partake in leisurely activities such as fishing, going on hunts and riding horses.

A year after Miles was born, the Davis family moved from Alton to St Louis, Illinois to a mostly white neighborhood.

From the ages of six to eight he attended an all black school, where he excelled academically and first started taking an interest in Blues and Gospel Music.

At age nine, Davis was given his first Trumpet as a gift and would be given weekly lessons from one his father’s dental patients.

He was taught not use the vibrato while playing the trumpet, which went against the convention of the time.

During his teen years, the family moved again to another part of St Louis where he was earning a weekly wage playing for local bands in the area.

By the time Miles got to high school, he was playing for his school band whilst continuing lessons with another tutor.

By the age of eighteen in 1944, Davis joined Eddie Randle’s Rhumboogie Orchestra, but not before finishing his studies at his mothers insistence.

Once out of high school, he left for New York to became part of Jazz society.

Whilst studying at the Institute of Music, he met Jazz musicians such as Charlie Parker, Thelonious Monk, and Charles Mingus.

His first album was recorded and released in 1946 and soon after that Davis became one of the most talked about artists on the Jazz scene.

In 1949. he released the album “Birth of The Cool” which was the beginning of the new Jazz era.

Following albums included “Milestones, Kind of Blue, and Porgy and Bess” from his 1950’s catalogue.

In the sixties, Davis further pushed the boundaries of Jazz with albums such as “Sketches in Spain, In A Silent Way, and “Bitches Brew.”

He mixed Jazz with Hard Rock , which was emerging towards the end of the decade.

By the mid seventies, ill health from a drug and alcohol addiction forced him to retire.

Miles was forced to take a break from the public eye for five years whilst trying to beat his addictions, and getting surgery for a hip replacement.

In 1980, Davis re-emerged and began touring again, releasing notable albums such as the electro-pop driven “Tutu” and the Latin influenced “Siesta.” During that same period he also took part in the Anti-Apartheid record “Sun City”.

Miles Davis died in September 1991 at sixty-five with his funeral held the following month.

Attended by hundreds of friends, family members, and artists from the music industry.

He had been married three times and was the father of four children.

These Porsche Design P8479 Sunglasses are similar to the ones once worn by Miles Davis, which as well as B Titanium/Blue Grey are also available in Golden/Green and D Dark Grey/Blue. 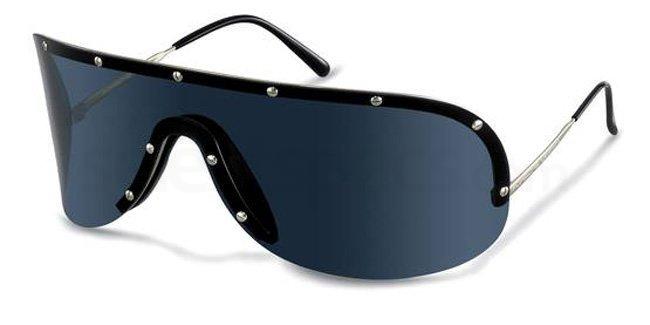