Tailor-made suits, soul music and zipping along on a nippy little vespa.  There’s many things that could summarise the mod culture that exploded in Britain in the late 50’s and surviving well into the 60’s.

I may not have been there, but I can always see the glint in my dad’s eyes when he reflects back and reminisces. But what did it all mean?

Well according to Prada it was much more than just a fashion statement, it was a lifestyle, a state of mind.  And that’s exactly the ideology they’ve pumped into their new SS16 eyewear collection.

Launching Today. Now You Can Unravel the Hidden Message in the Prada Mod film. Go to Prada.com #pradaeyewear #pradamod

With the launch of their new collection, Prada have also created an eight-part digital film starring an enviously stylish ‘Mod Tribe’ that wander through architecture that seems created, or at least influenced by, architects of the time.

In Prada’s own words Vanessa Moody, the ‘Mod Tribe’ leader, “floats through the post-industrial landscapes that surround her”.

The campaign captures perfectly the style, the fit and colours of mod fashion and is complimented by retro and subtle text graphics in certain scenes that viewers can explore in order on a dedicated part of the designer’s site.  Prada says:

The new Prada Mod Eyewear collection overturns the codes of elegance by playing with fashion staples in a provocative way. 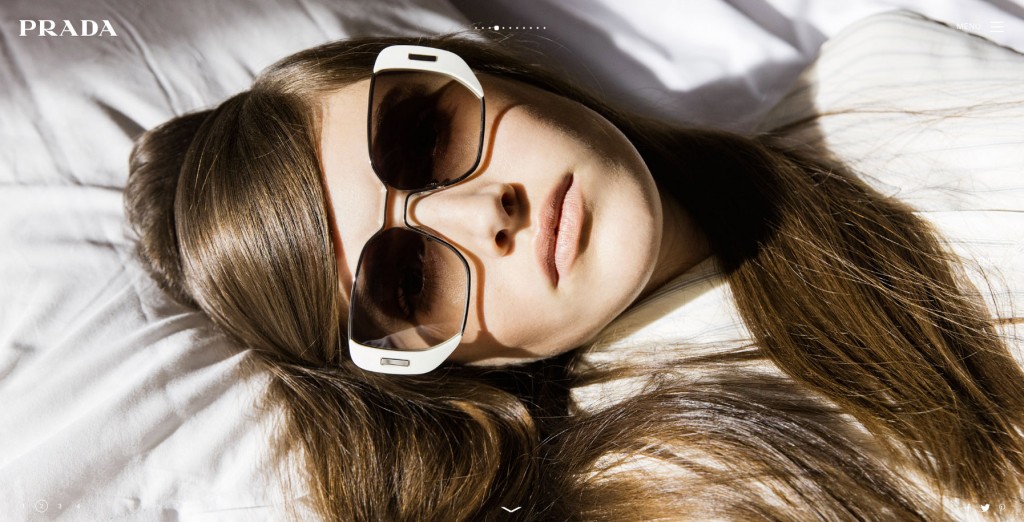 The campaign wholly focuses on female mod fashion with a strong focus on eyewear, the sequence of glamorous shots reveal models from both their optical and sunglass collection.

With only two model designs for both the optical and sunglass collection they definitely feel more limited than Prada’s other collections. The sunglass frames, like above, feature a full-rim wire frame, outlining a rectangular geometric shape.

Prada have also given a new spin to the typical horn-rimmed design of yesteryear with placing high quality acetate detailing on the edge of lenses, instead of lying above and framing the eyebrows it pulls in the futurism trend from the 60’s too.

The optical frame featured has classic Prada colouring, with a mottled Havana colour, much like what we’ve seen before.  Although we can spot a bit of a difference from a typical Prada frame – from a fashion house usually proud of its big, bold and grand outlines, the oversized and rounded shape of the above glasses only has an understated cat-eye flick.

Despite having liked to see the wire detailing from the sunglass frame transformed into a wearable glasses frame, we’re impressed nonetheless.

What do you think of the latest Prada eyewear campaign?  Does it have you reaching out for your old Lambretta tucked away in the garage, or inspire you to be a little more mod in your everyday attire?

Let us know your thoughts and comments in the section below – keep up-to-date on Prada’s collection at SelectSpecs by clicking here or watch all eight episodes of the film on Prada’s website here.

Female rappers of the 80s were not seen as a force to be reckoned with, as much as their male counterparts. However, they bought…