When the words Great Britain pop up, a few thoughts immediately come to mind: London, fish and chips, football, Winston Churchill, Margaret Thatcher and Brexit. The last two are connected, and you might be wondering why as the Iron Lady was a powerful politician in the 1980s.

Well, 10 Downing Street has a new tenant since last year, one who is compared consequently with Thatcher.

Theresa May is the second woman to have ever ruled Britain. In a world dominated by men, females are considered fashion icons.

So let’s have a look at the impact of the two ladies in terms of fashion and style.

In an article on independent.co.uk, there is a strong emphasis on the fact that Margaret Thatcher used power-dressing as a political weapon. This style goes back to the 1980s.

With the adoption of the tailored look, power-dressing became a fashion statement of women and, as the website fashion-era.com states, it was inspired by the style of the actors from American soap operas like Dallas or Dynasty.

In an interview for The Independent, Dr. Jane Tynan, lecturer on fashion history, points out that the style of Mrs. Thatcher was unique:

At once she sought to embody conservative values while also seeking to assert her right to power as a woman. Conservatism did not necessarily embrace women in positions of power.

Margaret Thatcher at 10 Downing Street, 1989. She was attending an event that celebrated the ten year anniversary of her election as Prime Minister. #MargaretThatcher #Britain #politics #primeminister

A few elements define her style in a very accurate manner: the pearls, the pussybow blouse and the handbags.

Regardless of a conference or public event, Mrs. Thatcher became famous for her pearls which seemed to be a permanent asset.

In December 2015, some of her personal possessions were auctioned at Christie’s. Diamonds and pearls made up a part of the collection which was sold for £242,500, as theguardian.com states.

In terms of the blouse and dress, the Iron Lady became famous for the blue dresses she would wear at important public appearances.

Her blouses were mostly accompanied by silk scarves. Let’s not forget about her large handbags designed by Launer, which became a trademark of Thatcherism and of 1980s fashion.

Just to define her style, let’s have a look at her shades. This picture was taken 35 years ago but the huge lenses are still a must-have for a fashionista.

If you want to copy her look, you can simply try the always cool Prada PR 16QS. While stylish, this item is the equivalent of elegance and decency. 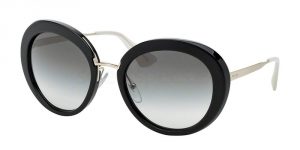 But, now there is a new face at 10 Downing Street. And as we expected, the new tenant also brings a story about fashion and style.

Theresa May was appointed as Prime Minister after the resignation of David Cameron, and she became an icon for fashionistas all over the world.

Telegraph.co.uk highlights that Mrs. May is a big fan of brands like Russell and Bromley, Vivienne Westwood, Roland Mouret, & L.K Bennett.

The politician knows how to promote her taste in fashion as every appearance is a topic of discussion for critics.

If Margaret Thatcher nationalized the economy during her time as Prime Minister, Theresa May seems to impose the domination of the national brands.

This year, she did a photo shoot for American Vogue, in which the main subjects were fashion, politics, life and Brexit, of course.

The PM talked about fashion statements in politics and stated:

I think it’s important to be able to show that a woman can do a job like this and still be interested in clothes.

As everything comes to legacy, Theresa May will always remain the icon who made the kitten heel a world-class star. With the help of the low stiletto design, she marked the world of politics with her personal touch.

At times, the formal style of Theresa May has been compared to the one of Margaret Thatcher, as her outfits and necklaces created the image of Thatcher 2.0.

But, she put an end to this debate with a clear statement to vogue.com:

There can only ever be one Margaret Thatcher. I’m Theresa May. I do things my way.

There is no doubt about her taste in fashion, but a good leader always works in the best interest of their country.

Especially when meeting the most powerful leaders in the world. At the official meeting with Donald Trump, she emphasized the beauty of British designer brands by wearing a two-piece outfit from Amanda Wakefield and shoes from Russell & Bromley. Pretty cool, guv’nor!

Theresa May declared the UK and US can lead the world "together again" as she met with President Donald Trump at the White House. Mrs May said the special relationship would be "renewed for a new age" as she prepared to become the first world leader to meet Mr Trump since his inauguration. . . . Picture: AP Photo/Pablo Martinez Monsivais #OvalOffice #WhiteHouse #DonaldTrump #TheresaMay #May #Trump #MayTrump #TrumpMay #Telegraph

Another masterpiece in terms of fashion is the PM’s addiction to leopard print.

Apart from being eye-catchy, this choice is another proof that she loves to diversify and adopt a style which is not usually seen on female politicians.

We all know politics is a chess game, but Theresa May makes the fight a colorful place to be.

Already in the mood for politics? Have a look at political leader’s eyewear picks

Looking for a new outfit, but don’t know which way to turn? Introducing SS18’s hottest trend – leather skirts! They may have fallen out…