He’s the Years & Years frontman with an ear for an infectious hook and a penchant for forward-thinking fashion. And while Olly Alexander is certainly a force to be reckoned with in his creative endeavors, it’s his recent campaigning on issues such as mental health that have thrust him front and center as an ambassador for young people everywhere.

Exploring his experience with depression, a new documentary featuring the singer is set to air on BBC Three, examining the ties between mental health issues and the gay community.

Join us as we look at Olly’s bold style statements and favorite looks.

Olly’s recent collaboration with Converse channels serious 90s street vibes, and we are absolutely here for it.

The pops of primary color perfectly compliment each other on top, while the darker bottoms let the black high top Chucks do the talking. The singer often sports a pair of Converse or Nikes with his outfits, adding an activewear edge to his look.

An advocate for various charity campaigns and often speaking openly about his own struggles from an early age, Olly uses his platform to speak to his fans and followers as an ambassador for good causes . His Choose Love slogan tee, a play on the iconic Choose Life tee immortalized by George Michael in the 1980s, creates a simple but powerful statement of equality and acceptance. Matched back with a pair of on-trend oversized frames (which we just adore!), Olly lets his look do the talking.

Try the Oliver Goldsmith OLI001 to steal his style: 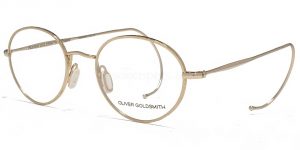 It was an appearance that certified Olly as one of the most colorful and creative pop superstars on the scene. Taking to the stage in a rainbow-tasseled poncho, the Years & Years frontman wowed Glastonbury crowds during his celebratory set.

We love his choice of white high-top Converse paired with shiny silver shorts – an example of bold styling by a man who isn’t afraid to defy expectations and transcend fashion norms.

It’s no secret that Olly is a fan of all things glam – from glittery catsuits to the sparkly separates pictured above, the dazzling singer often experiments with different fabrics and materials to turn traditional looks on their head.

Loungewear is transformed into high fashion here, while keeping it cool and casual with a pair of silver Nikes and signature white sport socks. We love the shiny grey tee / shorts layered over a short sleeve roll-neck, complete with his staple silver chain – a stand out look for the upcoming festival season!

Never one to follow rigid fashion rules, Olly takes the pastel trend of late 2016 here and runs with it, piling pink on pink to make the trend his own. We love his pairing of a simple white vest with patchwork quilted trousers, lifting a typically dressed-down look by paying close attention to detail.